Last month, we ran the 10th iteration of Rumble in the Prairie, DDRIllini’s yearly tournament. This was my third (and likely last) spring tournament, so I’d like to recap about how it’s grown and talk about the wonderful people who help make it happen.

(This is pretty long; links to different sections if you only care about some of it) 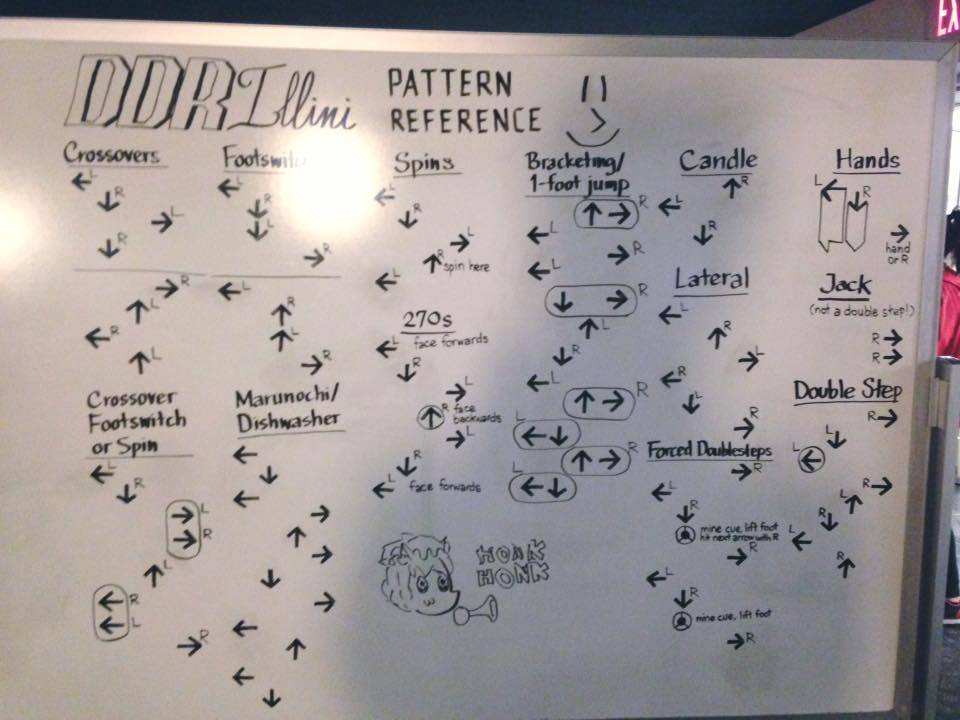 Our whiteboard, shortly after I first arrived, as penned by Tana. Apparently it's internationally famous.

My first tournament was RIP8, as a freshman. I had just joined the club, barely able to pass 12s or talk to any of the people at the event. I made the mistake of eating Black Dog (incredibly heavy barbecue) right before failing the (relatively easy!) qualifier. I spent most of the tournament hanging out with (since-graduated) Will and Sam, but ended up completely socially drained, collapsing into bed when I got back to the dorms. I had fun, nonetheless, seeing how vibrant the community surrounding the game was, and meeting so many cool people.

The treasurer position opened up and we had “elections” (unopposed) via Facebook poll. I submit money paperwork for the first time, and helped run the next fall tournament. Harris ran an SRT (which went fine despite his belief that it didn’t!), but that’s about all I remember — it’s all kind of a blur at this point. 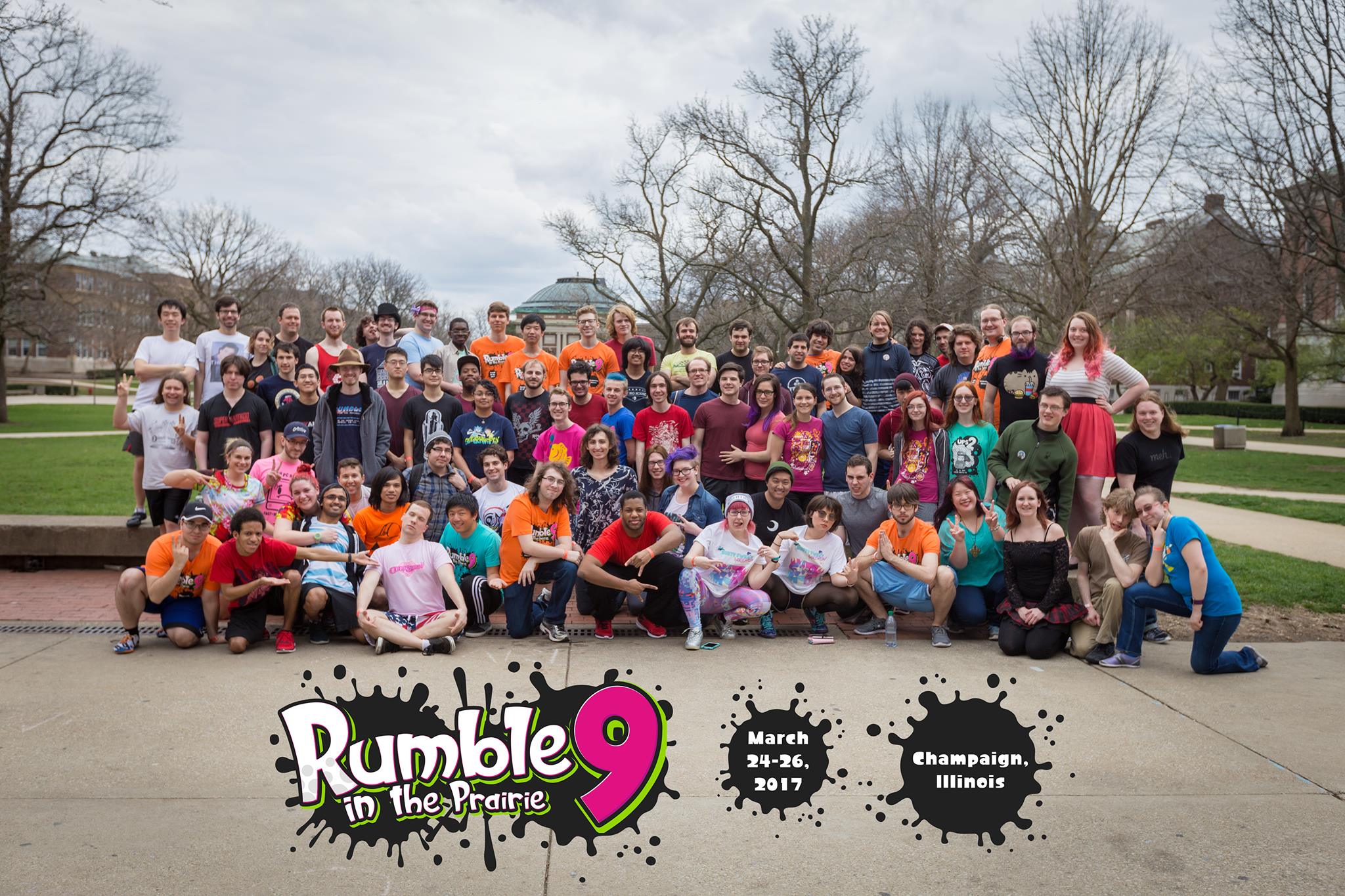 Do not touch this image. It contains great power.

RIP9 swung around, and I felt more confident helping out and taking an active role in planning things ahead of time. I’ve recapped it some before here. This was the first time we ran SM5. Initially, not everything on the PC was configured correctly (missing sound device in Stepmania.ini iirc) but Dan, Devin, Tyler, and David (y’know, a collection of the devs who literally wrote parts of the userspace software, the kernel driver, theme, and syncing standard for the game) all jumped right on the computer and figured out the problem within half an hour.

I spent the entire week leading up to it preparing — setting up the SM5 PC (which sped up matches tremendously) printing custom wristbands and stickers with Ben, asking him, Will, and Matt to make a Snapchat filter, asking Brandon to design a marquee, setting up forms for signups and better tracking of participants, making a website to centralize information, setting up a stream, exporting videos, and running matches. We barely finished on time, but we ran matches fiercely and somehow managed. I did a LOT of things myself where I should’ve asked for help, and consequently slept through most of Monday and a good part of Tuesday. I remember sitting in my bedroom at 4am on Monday, reading a couple of the shoutouts posts, and feeling incredibly proud and content.

And holy shit, how could I forget: this was the year that I made it into the NYT and Ryan’s chiptune notepad All Star chart got Jim and Ryan onto Kotaku (plus Harris, who’s “making an L on his forehead”). Marty, the guy who ran the first RIP, came back and was floored at how large the event had grown since he’d been there last. I really enjoyed asking him about how the event started, and I felt honored that he came back.

We got a lot of feedback that the Rec Room was cramped, so we tried alleviating that with outside setups at the next tournament. I think it helped. 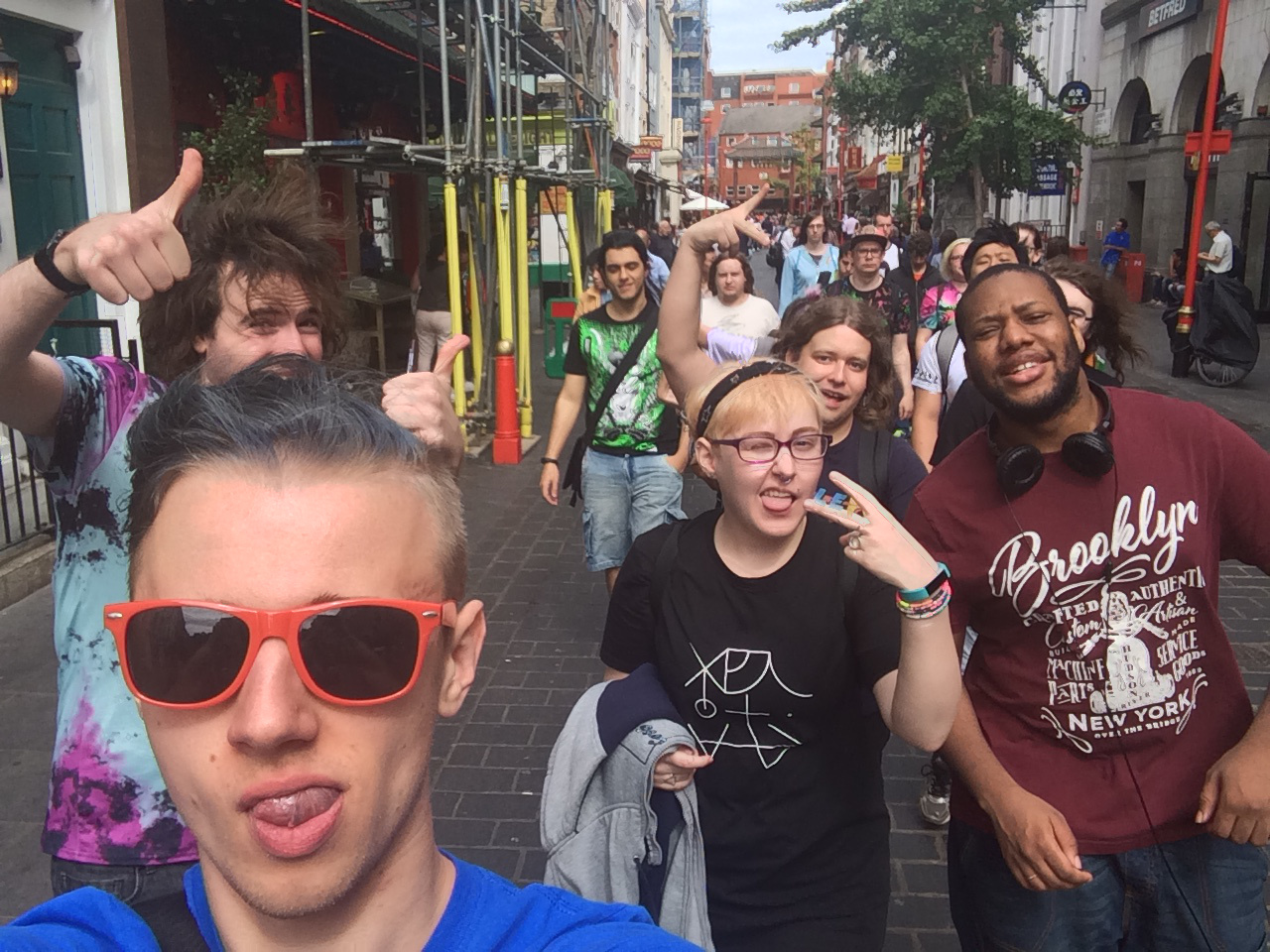 Over the summer, I went to UKSRT9. I’d never been to London before, and it was fun hearing my English slowly get more British. I really enjoyed getting to know people from UKSRT backroom (even if that meant staying with a bunch of them in a cramped apartment for a week). I met a lot of EU dance game players! And invited a few to come to RIP (one actually did!!!!! wow!!! thank you Kate!!!)

The actual UKSRT event was relatively short, but stomping around London and Camden Town was a real treat. This was the first dance game event I’d been to where there’d been downtime. Since running tournaments is all-consuming, it was incredibly refreshing to be able to actually hang out with everyone.

With that under our belt, we ran the next fall tournament, RIP9.5. I made an effort to relax and take things easy, and so we casually tested some new tournament formats that were better suited to our time constraints and the number of people we have attend. I set up OpenITG on our Linux install, which again saved us time by enabling us to not rely on the ancient stock ITG computer for couples.

Favorite moment: “Twitch Plays: Exit Vim” in which Ash watched Ken try to use vim for a last-minute theme hack.

I tried really hard over the course of the semester to encourage our new underclassmen to come to the event, and quite a few of them did! Particularly in the spring. 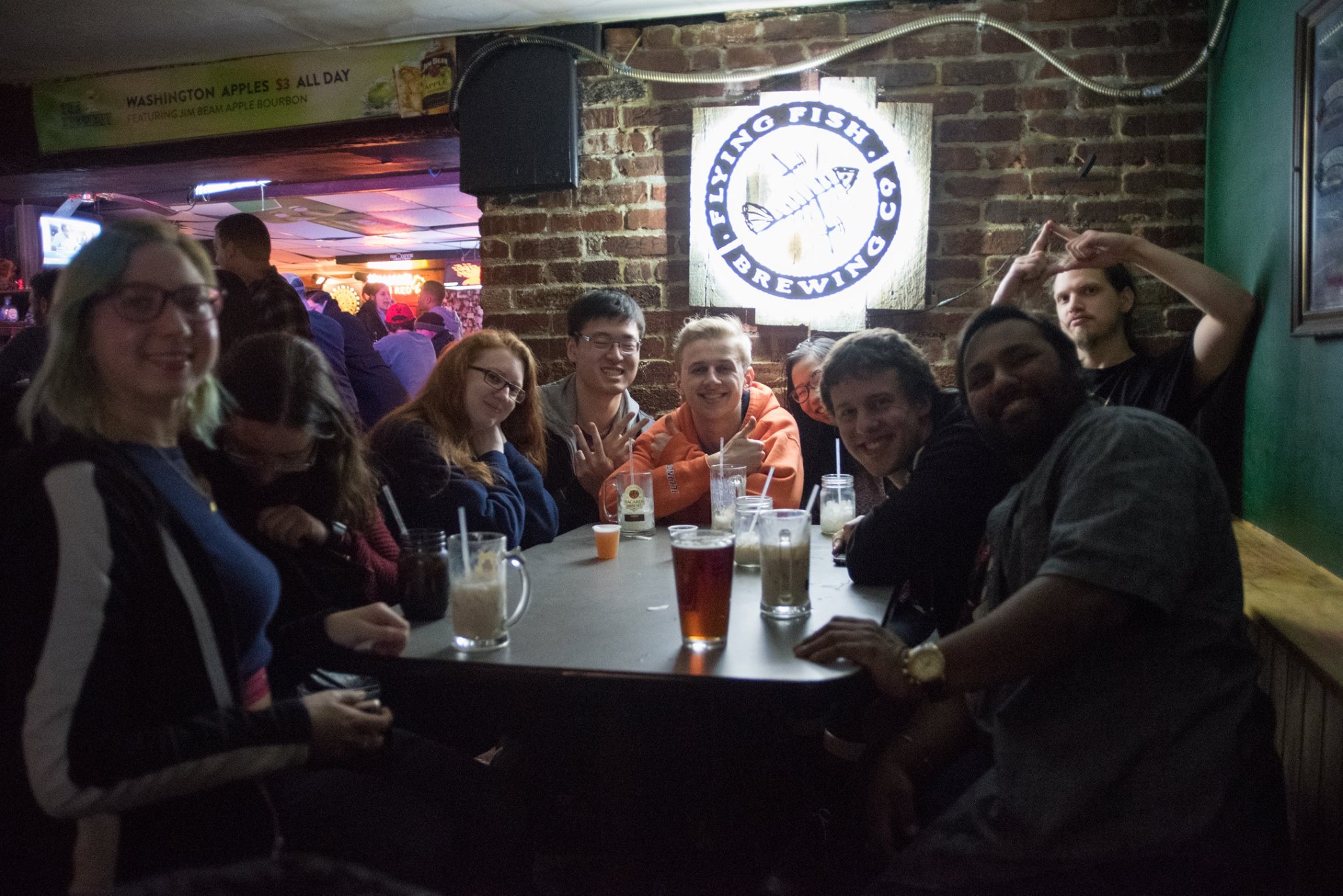 Ben and I went to UPS3, which ended up being more of an adventure than we had planned. He took an Amtrak, which was inevitably late and left him stranded in Pittsburgh alone for a couple of hours.

Tyler kindly hosted us and chauffeured us around the whole weekend, and I was really grateful for the opportunity to meet East Coast players and Penn State students. I don’t remember the name of the (overpriced! Chambana bars are way cheaper) bar we went to, but the drinks were really tasty and it was an awesome experience drinking with everyone (Ben and I had turned 21 fairly recently).

or, everything that we do to make this event happen. (This is partly a roadmap for our underclassmen). 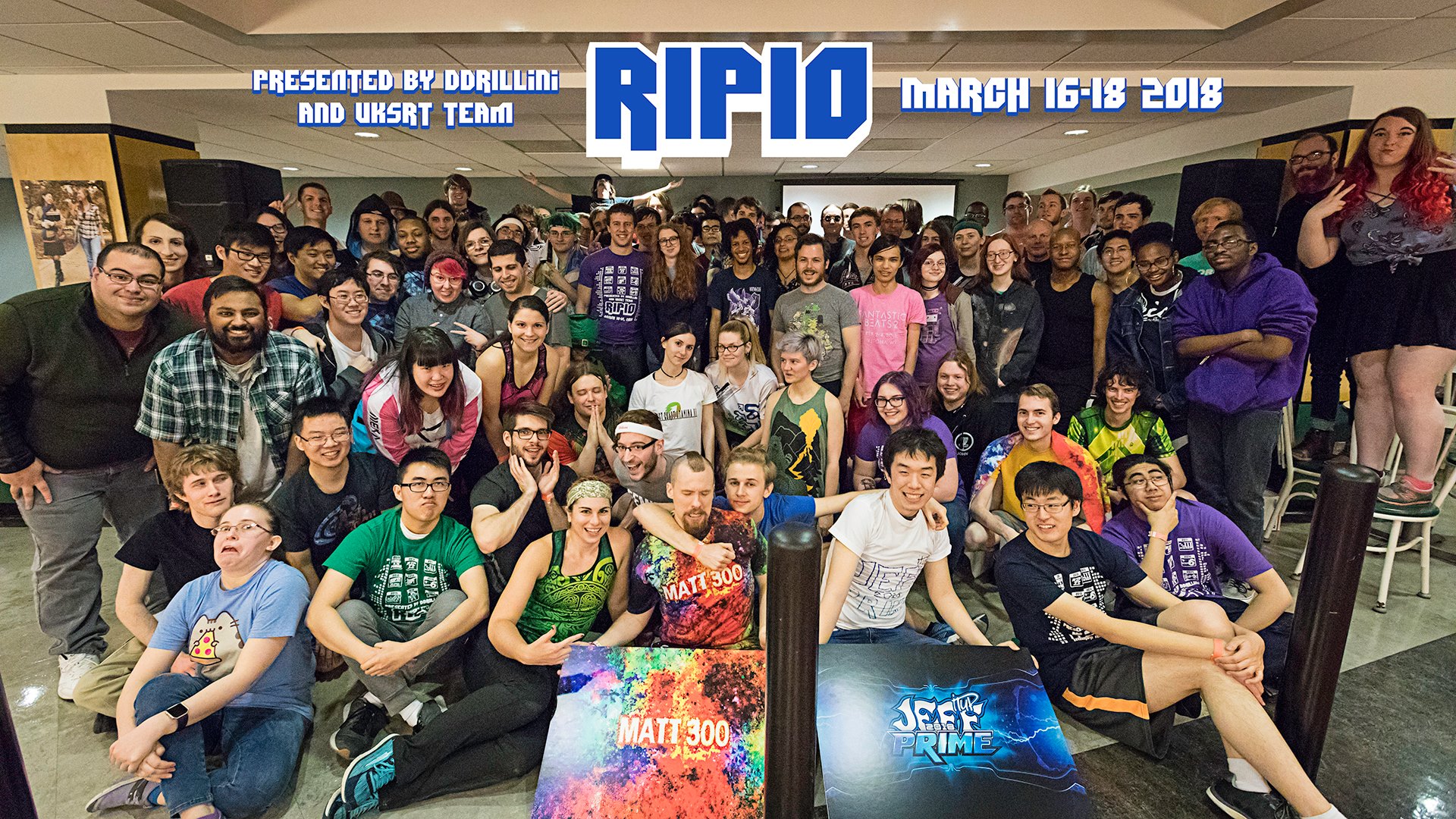 The big one. This was it. The 10 (technically 9 b/c fencepost error) year anniversary of Rumble in the Prairie. Everything we’d learned so far, applied to the biggest tournament yet.

Everything went smoothly. I can’t complain in the slightest.

But they’re less complaints so much as “things that could’ve gone better”, that I feel personally responsible for, and wish I had been mature enough to handle better.

Here’s all the cool new stuff we did this year, though!

I do not have data on RIP8, as I was not involved in running it. I do have data on the fall tournaments, but I don’t care about them as much. (styling on my blog doesn’t have nice table formatting, ugh. oh well.)

It’s possible that I was very liberal with counting this year (if you were near the Rec Room, and somehow affiliated with dance games, I counted you), but, we totally cleared 100 people. Incredible.

Our cash outflow for the tournament came in at around $2500. A lot of that came in as SORF funding or entry fees, but that is a staggering amount of money regardless.

That’s exactly 69 (nice) people involved in the smooth operation of this tournament. We literally could not do it without your help.

Thank you so much.

Well, it looks like Matt, Jeff, and I are all graduating before the next (spring) RIP, so we won’t be around to run the thing from the student side. Mary and Ben will still be around, so they’ll take over.

I’ve gotten a lot out of playing dance games. I lost 15 pounds (~6.9kg, 1 stone) as a freshman and now have the necessary baseline stamina to do any kind of running or physical activity. I’ve learned a lot about logistics, and how to coordinate a large group of people (but honestly, most everyone handles themselves, RIP practically runs itself). I’ve learned countless amounts about Stepmania and awful C++ codebases, and plenty about dance game hardware. I’ve made so many good friends, and found a home of incredibly inspiring, fiercely creative, multitalented people.

I realized that I can graduate early if everything goes smoothly (which might not, you never know), so there’s a chance I’ll be in Japan (gonna visit Naohiro!) during RIP11 for an exchange. I’m excited! I’ll probably move to Seattle afterwards as well. So…. if you’re there… I’ll be looking for a cab to play on regularly…. (hint hint)

We’ve identified a couple of Audacious Underclassmen to who(m? (m’std’ve)) we’ll probably pass the torch. They were incredibly helpful this time around, and I’m sure they’ll rise to the challenge of running RIP themselves. I’m passing on the role of treasurer at the end of this semester, and I’m going to be entirely hands-off during my last semester — the underclassmen will have to sink or swim. But, I believe in them. I hope you all do too.

Thanks to Andrew, Ben, and Cass for proofreading.