I consider myself a pretty efficient worker when I get down to it. Not that I work all the time (actually, I don’t work much of the time, but that’s another issue), but that I work with optimal utilization of available resources (read: I like configuring my gadgets to help me do things). It comes from a childhood of ample freedom with tech, in that my father always let me to take things from him and put them into the most useful form. Beyond that, I like technology. Hell, I love technology, and the productivity boosts it offers. So you might imagine my elation when my school announced it would begin a 1:1 iPad program starting this year.

Bias against Apple aside, I had always entertained the notion of walking into my classes with a computing device. The particular draw was the ability to record homework assignments into Wunderlist (which, as you can see below, has grown of of control pretty quickly). I dreamed of a day where I could freely check my email, google an unknown topic, or zero my RSS feeds on the fly—and that day came.

But it came with more inconveniences than I could have ever imagined. There are two major problems. 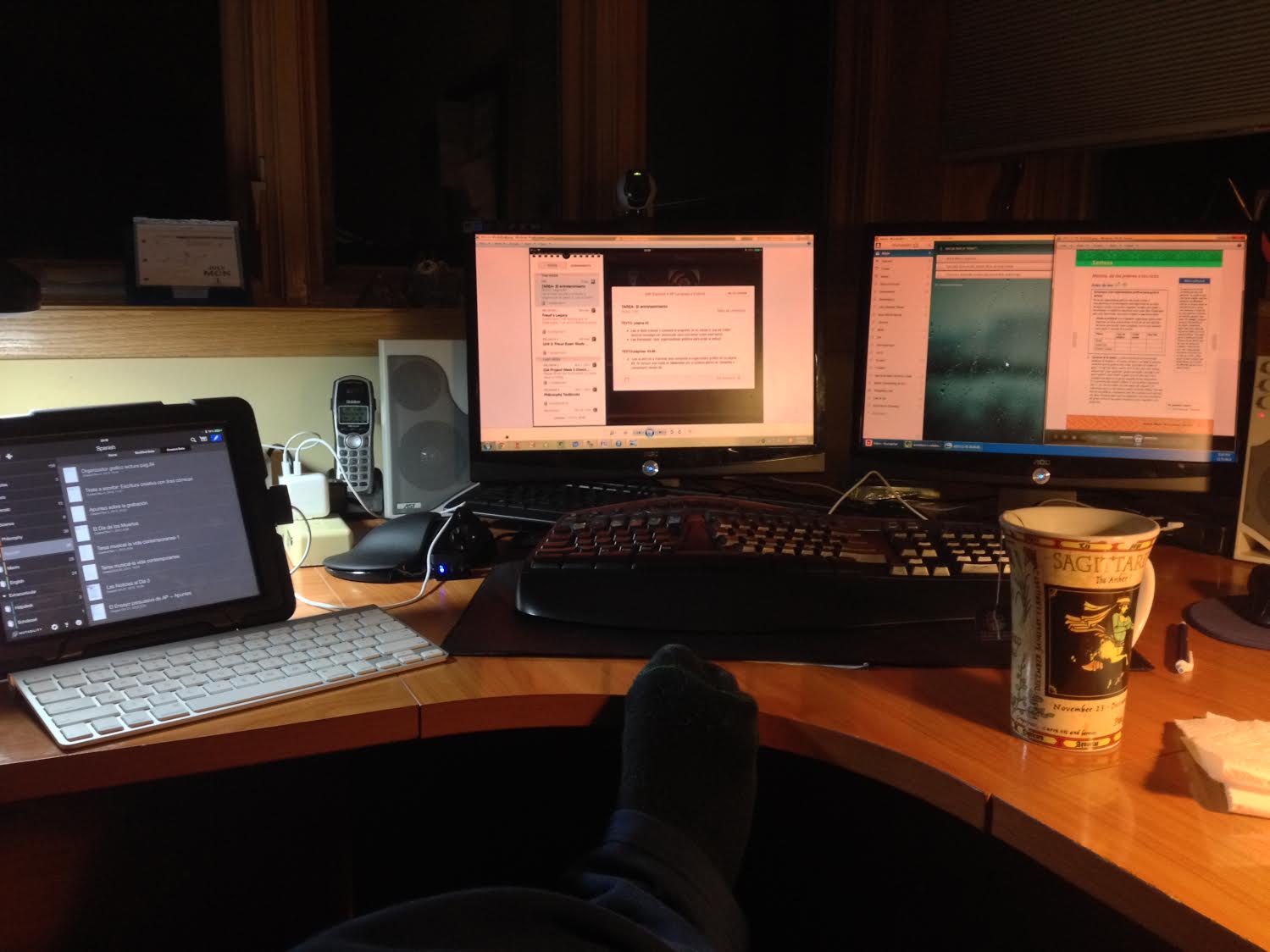 That’s my iPad for composition. One monitor has a screenshot of my ipad for the assignment. Another my todo list and the book page itself, the pages also screenshots.

I fail to see how this is more efficient than a book and a notebook and an assignment book. The amount of underlying infrastructure that I have setup to get everything running is utterly ridiculous. Granted, I love typing instead of writing, but the point stands. Notability, Dropbox>Camera Uploads, iOS running on two devices that need to be plugged in at the same time, all of this is absurd. I consider myself technologically-inclined. But I’m overwhelmed at the amount of setup I need to compensate for the complexities of the iPad program. I can hardly imagine the struggles it causes for people who aren’t technologically inclined. After one teacher mentioned that he had heard of one student whose parents bought him two iPads (one for the book, another for note taking), I seriously considered it.

Admittedly, I am inclined to overcomplicating things, and I tend to be a bit spoiled technology-wise, and I very well might be overcomplicating this. But I think it’d be pretty difficult to simplify the setup to not use two screens. Switching between Notability and the textbook is a pain.

I would be perfectly content with a book, or digital book applications that didn’t suck. The vast majority of them are buggy or full of DRM.

Now, iPads are extraordinarily convenient in that they’re light. I’ve opted for an extraordinarily light backpack, instead of my usually excessively hefty one. I never go to my locker anymore. I rarely forget books, since the majority of them are on my iPad. On the other hand, however, when the internet goes down, I lose half of my books. Because DRM sucks.

I appreciate my relatively conservative school’s attempts to remain at the forefront of tech adoption. But trying to depend on a system that’s not really there doesn’t really work.